The following figure (Figure 1) shows the statistics of EEE according to Eurostat. As it can be seen, approximately for every three electrical and electronic equipment placed on the market, only one is reused or recycled. 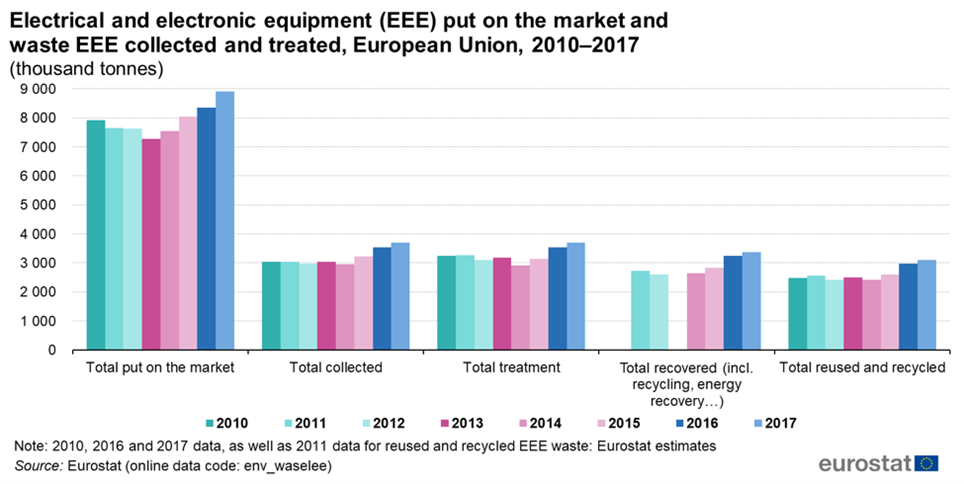 European Commission Vice-President Frans Timmermans (European Commission, 4 March 2019), responsible for sustainable development, said: “The circular economy is key to putting our economy on a sustainable path and meeting the global Sustainable Development Goals. At the same time, much remains to be done to ensure that we increase our prosperity within the limits of our planet and close the loop so that there is no waste of our precious resources” [1].

Responsible treatment of end-of-life (EOL) products can include reusing, recycling, or remanufacturing products or parts. These processes can be both environmentally and economically beneficial. Waste is minimized, while valuable components and materials are recovered. Product disassembly is one of the main steps in EOL treatment processes and involves the extraction and segregation of the desired pieces, parts, or materials from the product. Disassembly contributes to the treatment of EOL and enables the repair and maintenance of the products.

Ecointegra, a company located in Navarre, Spain, is one of those plants dedicated to the treatment of EEE that employs 40 people, 90% of whom are people with disabilities. Its main characteristic is to be a waste management model and transparency so that the society is aware of environmental and social work it carries out.

One of the dismantling processes performed by the company is the disassembly of refrigerators. To disassemble these household appliances, once the drawers and shelves have been removed from the interior, the magnetic gasket attached to the door, which allows the door to close hermetically, must be taken off. This task is currently performed manually. As it can be observed in Figure 2a, the workers use a screwdriver to pry the gasket open at one of the corners and pull it out.

Likewise, both the state in which the company receives the refrigerators and the form in which the gaskets themselves are found (Figure 2b) not only makes their extraction a tedious task but in the long term, the effort made by workers in uncomfortable and unnatural postures to remove them can lead to musculoskeletal disorders. Therefore, due to these issues, it is desired to automate this task. 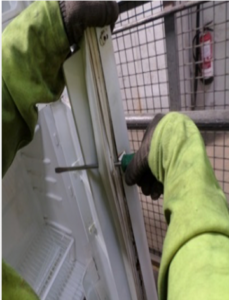 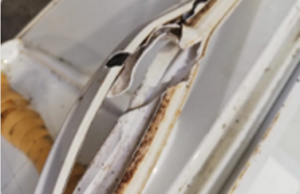 Notwithstanding, unlike the assembly process in the traditional industry, information about the products is often inaccurate or incomplete at the beginning of the process during the disassembly of products. Historically, manual work has been preferred over automation in disassembly. The human’s perception, agility, and intelligence are better adapted to changing and ill-defined processes. The successful implementation of disassembly automation requires a significant improvement in these attributes, which can be achieved with the human worker’s help. However, human-based processes are economically unfeasible due to slower time response and labour costs. Consequently, the disassembly option is often ignored in the industry.

The replacement of human labour by automation has successfully increased many industries’ cost-effectiveness, especially manufacturing and production processes. However, the disassembly process involves several challenging problems and cannot be considered the reversal assembly process. Several difficulties arise due to three main aspects: the physical uncertainties associated with the EOL product condition, the large variety within one product category, and complexities in process planning and operation. Therefore, disassembly automation needs to be designed to be flexible and robust enough to overcome these issues [2].

Collaborative robots are safe to operate without fences next to people and are more flexible than traditional robots. They can easily be reconfigured and retrained for new tasks in a production [3]. Hence, the human being can interact with the robot by taking advantage of his/her capabilities (decision-making capacity) and the robot’s capabilities (strength, endurance, stamina), thus creating a synergy allowing them to accomplish tasks that were not possible for one or the other [4].

The VALU3S project will cover this need through one of its 13 use cases, called Human-Robot Collaboration in a Disassembly Process with Workers with Disabilities. To this end, a collaborative robot will be used to interact safely and effectively with Ecointegra’s personnel with disabilities, so that not only an improvement in people’s health is achieved, but also an increase in the plant’s productivity, thus meeting the company’s objectives of doubling its production.

The complexity of the process and how to deal with it
The process of disassembling refrigerators is more complex than it might seem at first glance. Even for the gasket removal, a wide range of factors with a high degree of variability must be take into account, including mainly, the characteristics of the refrigerators, the features of the magnetic gaskets, and the sequence of steps itself for their extraction.

On the other hand, the door gaskets also represent a challenge. The attachment of these to the doors can be influenced by both mechanical and chemical factors, and there is also no standard gasket profile. The reed they possess, how they are sealed to the door and their stiffness due to environmental conditions such as humidity are aspects to be considered.

Lastly, the magnetic gasket removal process consists of a set of pull up and cuts operations that can be repeated several times until the gasket is easily removed.

To address these difficulties, the proposed infrastructure is based on three main blocks, 1) monitoring the dismantling process (entire environment, including the worker) to enable the robot to adapt to a wide variety of refrigerators and gaskets, 2) the collaborative robot, as a flexible manipulator, takes over the removal of the gasket, 3) human-robot interaction to deal with unexpected situations.

For the identification and monitoring of the environment, the use of machine learning and image processing technologies is proposed. To this end, an object detection module has been created and tested with various refrigerators and their respective doors. Although these are textureless objects, the system is capable of identifying both the refrigerator and the doors in a video in which the latter are opened and closed, with an accuracy of 94% and 92,5%, on the refrigerators and the doors, respectively (Figure 3). 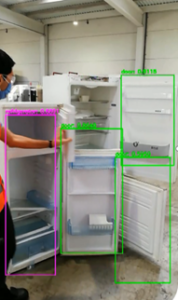 For the interaction between the worker and the robot, the system will additionally have a voice recognition device, through which the worker will be able to communicate and command the robot. For this purpose, the system will have pre-established commands, which will allow workers to start, stop or even redirect the robot when necessary. The tests carried out so far show promising results with 88,8% effectiveness in compressing the requested commands in a noisy environment. Nevertheless, these tests should be considered as preliminary since they will be further elaborated. In fact, it is of paramount importance to bear in mind possible challenges such as diction difficulties that some of the workers may have. Figure 4 shows the first prototype developed in the laboratory. 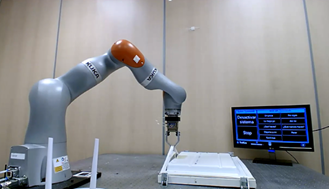 It has been a long and iterative process, but finally, we have achieved the first prototype! However, we are not stopping here, there is still a lot a of work to be done and many other factors to be taken into account to bring this prototype to reality. Magnetic gaskets, get ready, here we come! 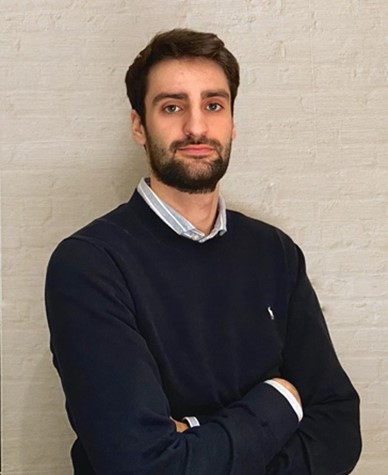 Íñigo Elguea, researcher in the R&D department at Aldakin Group
He received his B.Sc. in Biomedical Engineering from Mondragon Goi Eskola Politeknikoa in 2018. A year later, he obtained his M.Sc. in Biomedical Engineering, specialising in Biomechanics and Tissue Engineering at the Polytechnic University of Valencia. Currently, in addition to the VALU3S project, he is working on a regional project and is a Ph.D. student in collaborative robotics control through reinforcement learning. 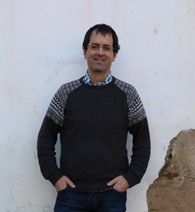 Dr. Nestor Arana, professor at Mondragon Goi Eskola Politeknikoa and visiting professor at Aalborg University
Dr. Nestor Arana is a professor and researcher at Mondragon Goi Eskola Politeknikoa in robotics and automation and visiting professor at Aalborg University. His research and teaching focuses on the area of robotics, artificial intelligence and artificial vision applied to collaborative manufacturing environments. He has participated in several national and international projects. He has 2 patents and 52 publications.